There is a lot of dishes, that are suitable for heating of water for tea – starting with electric kettle and ending for example with pot over the fire. The opportunities are really wide. Every piece of dishes has some typical attributes. For each person, these attributes (usually positive, negative and impartial) are subjective – what is liked by someone can be a problem to another one. And maybe for this reason, there are a lot of opinions about each pot – why is it good, why is it bad, how does it affect the taste of water and why is this kettle better than the another one?
I love heating water in tetsubin (Japanese cast iron kettle). I like the way how tetsubin change the taste of the water and the tea. I am curious person and I wanted to find out if this better taste is real or if it is only my imagination. It is not easy to test attributes of tetsubin in Czech Republic, especially if you need more of them. Tetsubin don´t have here historical and cultural roots and for nonspecialist European, they are overpriced and unsuitable for today hectic way of life. I come from a small town and I am not aware of another tetsubin in my neighborhood. But this summer I had a bit of luck. Thanks to my tea friends, I was able to gather three tetsubin. They all differ from each other by age, manufactory, quality and information we know or presume about each tetsubin – the perfect set for some testing.
Let me tell you the story. Once upon a time, there was the member of tea forum Tea Earth who presented his new tetsubin, which he bought for heating water. He was excited. But when he was cleaning his tetsubin, he founded a layer of something what he identified as an enamel. He shared his finding on forum. I think that he had to regret it because immediately we all assured him, that, thanks to enamel, he bought cheaper tetsubin of poor quality which is determined only for brewing tea but not for heating water. And we were so nice, that we were assuring him about his mistake over and over again. Then he said, cited: „I acquiesced that my tetsubin is good only as decoration. I was not good purchase.“ Later we arranged common “tea day“. At first he didn´t want to bring it, but I was able to persuaded him to bring his tetsubin. I had a plan to compare the taste of water from enamel and not enamel tetsubin. And here it is – I will call this tetsubin as Unknown. 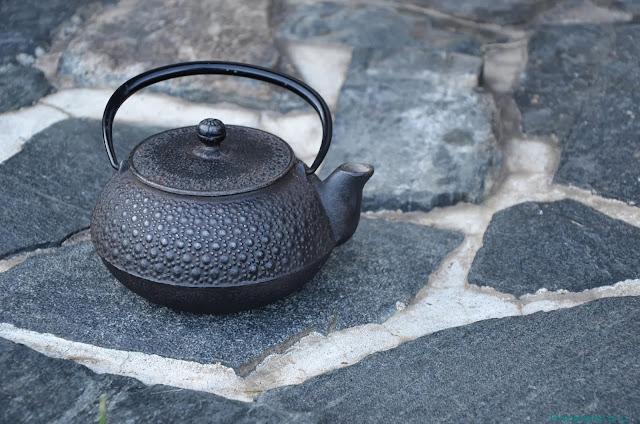 The artistic interpretation of exterior of tetsubin is good for eye but not for tongue. The inner side of pot is very important for taste of water. 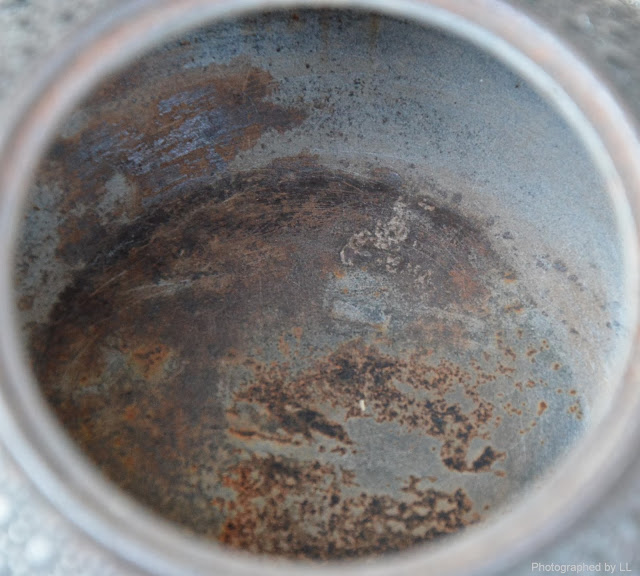 It is smaller tetsubin with the volume of half a liter. It is decorated by variation of Arare 霰 pattern. Manufacture of the handle of the kettle and handle of the lid reflect the lower quality of tetsubin. The folded handle of the kettle is advantageous during transport. But in this case the handle is so wobble that it doesn´t stay in vertical position and spoils the aesthetic impression of the kettle. The lid also fits very loosely. We don´t know the manufacturer or the age of the kettle – it was bought as a “Japanese cast iron kettle from the half of 20. century“. Thanks to its smaller size, it looks cute. As soon as I got it into my hands I looked inside. Simultaneously I was happy and sad. The colour and the way of rusting clearly demonstrate that it is not enamel tetsubin! My plan to compare enamel and not enamel tetsubin was destroyed. On the other hand I pleased my friend and the tetsubin doesn´t end as a merest decoration on some shelf.
And now my tetsubin – it is called New. After a long hesitation I bought it directly from Japan. It was blind purchase. At that time I didn´t know how the water from tetsubin taste. Fortunately I am very satisfied. 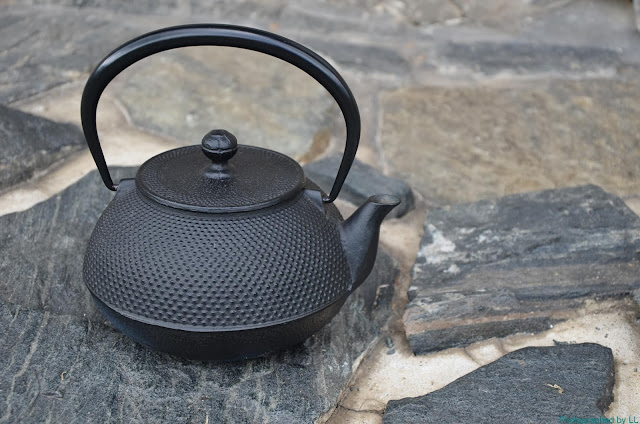 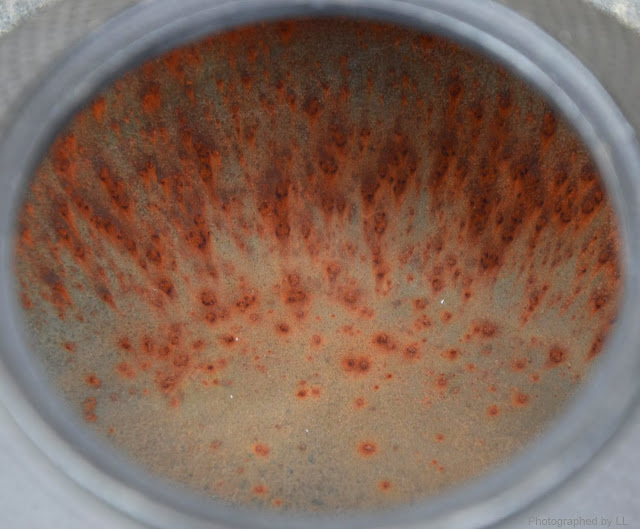 It´s a new tetsubin made by Iwachu company. It was manufactured around 2012. Both handles again reflect lower quality. It is decorated with the most common traditional pattern – Arare霰. The exterior is covered with a paint of Urushi plant. This black paint improves the anticorrosive property of cast iron. The spotted rust (after year of using), colour of rust and colour of cast iron indicate that it is classical not enamel tetsubin. The lid also fit loosely. Volume of kettle is 1,3 liter. The handle of the kettle can be folded and for now it stays in every position.
And here we have third tetsubin – it is called Beautiful. 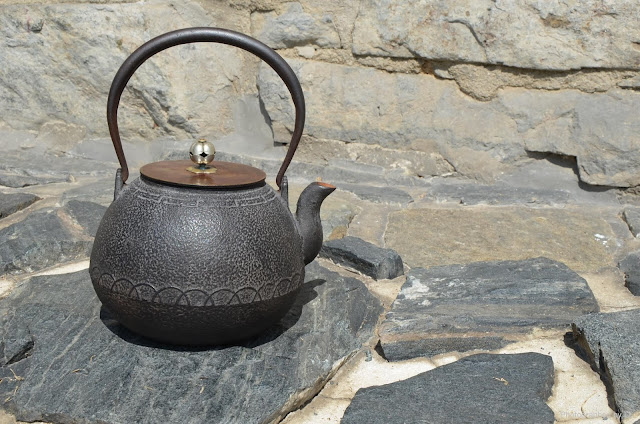 It is obvious at the first sight that this one differs from previous two. According to seller, it is 82 years old tetsubin from Showa dynasty. The kettle is signed as RYV-BON-DOH. The handle of kettle and handle of the lid reflect higher quality. The volume is 1,3 liter. Inside of the kettle and even the spout is completely covered with rust. The abundance of rust can be caused by it´s long disuse before purchase – but it is just a guess. It was many times (about 100!) boiled with water and now, finally, it seems that the original surface of cast iron starts to appear. Once again, I am sure that it is traditional not enamel tetsubin. The exterior is decorated with Hada 肌 pattern with addition of some geometric patterns.
I had to abandon the original idea of comparison enamel and not enamel tetsubin. But we gathered three different kettles and so we decided to compare their effect on the taste of water.
First we compared only water. We used charcoal stove for heating. The water from the first two kettles was moved to preheated thermos. We poured all samples to testers simultaneously immediately after the water in the last tetsubin started to boil. The test was of course blind. 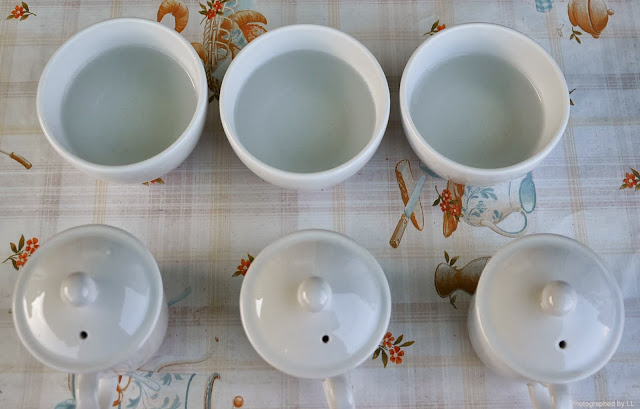 It is not surprising, that visually all samples seemed to be identical. From the left I marked testers as one to three.
I found water from the first and the second tester almost identical. I found a little difference in the third sample. But the differences were so minimal, that I was not able to order samples from the worst to the best. I felt the differences best at he first tasting. The other tastings were more confusing.
The second taster (with excellent distinguished taste) marked the second sample as the worst and the remaining two he considered as equivalent.
The last taster also taste only small differences. The paucity of differences can be the best described with his words after second tasting: „Hm, and now I don´t feel anything at all. That’s shit.“
We all agreed that water from all kettles tasted “sweetly“. We all found some differences but, if I remember correctly, the only one of us was able to order the samples from the worst to the best for a certainty. From the left, there was water from the New, Beautiful and Unknown tetsubin. The water from Beautiful was marked as the worst – it is the most rusted kettle.
Next we tried to compare the tea infusions. Because of its softness and balance of its taste, we choose White Peony. The test was again blind.

In the photography, the infusions on the left looks darker, but in reality, the color and fragrance of all infusions seemed identical. At the first tasting we all felt a bit differences, the others tastings were again confusing. The tea made the differences even smaller. The infusion from the Beautiful tasted the most differently. But this infusion was once marked as the best, once as the worst and once like something between. Every one of us orders the samples in different way. But the most experienced taster again marked the infusion from Beautiful as the worst.
I also have to say, that because of the lack of glass thermos, we had to use one from quality stainless steel. By coincidence, the water from Beautiful was in it. I am using it for over three years and I don´t think, that it affects the taste of water. It was cleaned a week before testing. But the others tasters had some doubts.
We found out that water from all tetsubin tasted very similarly – “sweetly“. The differences were minimal. I suppose that these differences are connected to the amount of rust in tetsubin. Some amount of rust in tetsubin is requisite - but everything in moderation. I have several reasons for this assumption. The First is that the water from most rusted tetsubin was marked as the worst. The second is that all producers and sellers of tetsubin recommend how to use tetsubin to prevent unnecessary rusting. The third reason is that there is a lot of internet discussion, how to clean rusted tetsubin, because the water from them taste “archival“. But if we want to confirm this assumption, we would need much more tetsubin and much more testing. Maybe some day.

I thank to all tasters for bringing their tetsubin, for their opinions and observations and mainly for beautiful tea day. 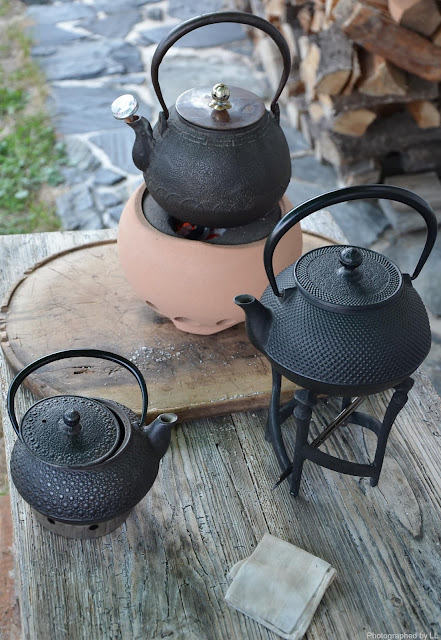