Questions about long term storage and mature of white tea

During one tea session we discussed the theme long term storage of the white tea. Every type of tea can be storage for a longer period of time. In some teas (pchu-er) there is a history and purpose in this activity, but in other teas (shincha) is the long term storage rather a funny idea. What about white tea? It is possible to store the white tea for a longer time in a certain way it gets positive impact on its quality. In other words will it matures? Does such storage have some history and rules?
Czech and English tea literature did not provide us answers. We did not find any book that would deal with this issue more deeply. Actually most of the books did not mention this theme at all.
And so we had to work only with internet sources. There is a huge amount of information on the internet but the quality such information is very fluctuating. Informative value of much internet information about this theme can be the best describes as „Friend of a friend said...“
Although the maturing of the white tea has at least one thousand years long history, the answers of the following questions and thoughts remain unclear.

1) Is mature of the white tea possible?
Majority of tea books recommends to consume white tea usually within one year from picking, longest within two years. This very pragmatic attitude corresponds with following idea. Why should we store tea longer than year, when after a year there is possibility to buy the fresh harvest? The freshness of teas is now very fashionable.
On the other hand we found out that the long term storage and mature of the white tea is not unusual thing. On the contrary in the past this matter was usual and with certain history.

2) Which procedure of mature of the white tea should we choose?
In one case we came upon a description of rather unusual style of mature of the white tea. Even the seller describes this style as a relative new one. First, the loose leaf white peony is left to „rest“ for a one year in a enclosed container. Second, the tea is steamed and then pressed to a cakes or bricks. Third, the pressed tea is stored in environment with 40 to 60 percent humidity. Higher humidity has to support the fermentation of tea, as the seller says, by „good bacteria“. In fact it is application of the process of maturing of sheng pchu-er to the white tea. For the need of this article I will call this style of maturing as a humid one.
Other sources describe different way of mature the white tea. This way demands a proper container that prevents the air, humidity and light to get inside. Loose leaf tea is usually stored in this way but application of this style for a pressed tea is not impossible. I will call this style of mature as a dry one.

3) Loose or pressed leaf?
In some cases there is recommended to mature white tea in a form of loose leaf. The second idea says that mature of pressed tea is better. We should decide accordingly which style of mature we have chosen – dry one or humid one.
Humid mature is more appropriate for pressed tea. Humid mature of loose leaf is also feasible, but it is much less usual.
Dry mature is also preferable both for pressed and loose tea. For the pressed tea there can be a problem to find appropriate container that will fit the size of tea cakes or bricks. In the case of bad container there could be much more air in the gaps than in a container full of loose tea.
Long term storage of pressed tea also requires much less space.

4) In what does the white tea mature the best?
Two opinions collide in this matter – traditional one and functionalist one. In the first case the most preferred containers are ceramic doses, glazed both inside and outside and with double lid that is sealed with wax. Certain historical authentication of this practice is very often mentioned. Furthermore we also came across some ideas that are harder to understand, for example that the tea can be influenced by the „energy of the dose“ and so on. If you are not afraid of quite higher cost, you can let to make the shape, size and appearance of the dose custom.
On the other hand there are recommended such containers that separate the tea from the outer environment in the best possible way. These containers do not take in account aesthetical value or history. Supporters of this style are not interested in not positivistic ideas and they usually recommend the well known resalable ALU bags. These bags are also really much cheaper then custom-made dose. 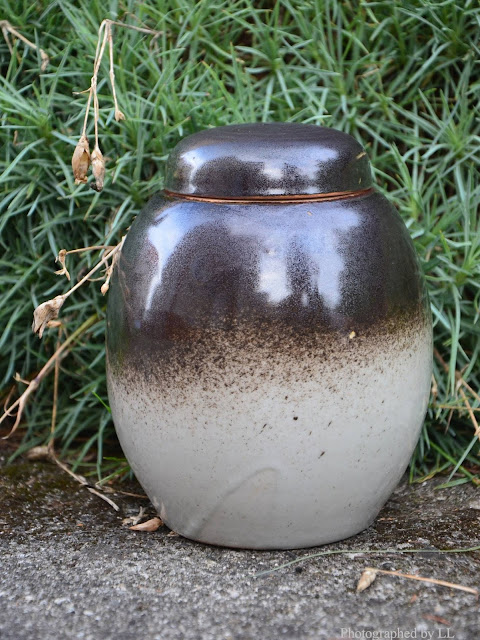 5) How long should we let the white tea to mature?
Whatever tea can mature whatever long we want. First question is when the tea reaches the peak of the positive changes. Secondly, is there a risk, that further storage under same conditions could harm the tea quality.
The opinions are again very different. We have find out some recommendations that three years of maturing are enough but as well as we have find out opinions that the white tea should mature at least fifteen years.
But most of the data was somewhere between these two limit values and it can be said, that the biggest consensus was at seven years of maturing.
In Fuding there is allegedly one saying about the white tea „One year tea, three years medicine, seven years treasure.“

6) Influence of the outside environment?
The state of the outside environment is very important in the case of the humid maturing (see point two). It is necessary to maintain the required level of humidity. The temperature of surroundings, the fresh air circulation and also prevention from odors should be taken in account. But we did not find more accurate description. What is the best temperature? Or how much the air should circulate in the case of humid mature of the white tea?
If we choose the dry style of maturing, then the most of outside influences become unimportant (humidity, air circulation, odour). Only the temperature of surroundings can have some influence. If it is better to try to maintain constant level of temperature or if we should try to adapt to fluctuations of temperature according to the seasons remains unclear.

7) Open or not to open?
Let us say, that we decide to mature the white tea for seven years with the dry style. There is question, if it is better to open the container (for example once a year) and check, taste and evaluate the state of mature or if it is more appropriate to do not disturb the inner environment and open the container after the expiration of the whole period.

8) Roasted or not roasted?
In one case we have find a recommendation that it is appropriate to roast the maturing white tea once a year. The roasting should revive the taste and fragrance of the tea. Unfortunately, there was not described how long and at what temperature to roast. It is obvious that we should roast only loose leaf tea that is maturing in a dry way. We consider necessary to mention that bad roasting or baking can entirely destroy the tea. To get the appropriate roasting machine is also not easy and cheap.

9) Which white tea is appropriate for maturing?
On the internet you can buy all kinds of the long term storage white tea, from Silver Needles, over the most often offered White Peony, to Longevity Eyebrow. It is most interesting to note, that opposed to oolongs and dark teas, where only the best quality tea should be selected for maturing, in the case of the white tea it is vice versa. For the mature of the white tea it is most often recommended to choose tea of the darker character (White Peony, Longevity Eyebrow), thus qualitatively lower grades of white tea. And due to the fact, that white tea from Zheng He is usually more oxidized (darker character). There is a recommendation to prioritize for mature teas from this area versus the teas from Fuding.

If someone of you is interested in or even deal with the maturing of the white tea, I will be glad for your observations, opinions and experience. Please write a comment.

Thank you for your time.